Baby Whisperer: my next career

I am a Baby Whisperer extraordinaire, and Auntie Maggie to countless children at home and abroad. But I always figured this was a calling, not a vocation.

Until this weekend. I just taught a seven-month-old baby to swim! First I got him acclimated to being in the water. If he got upset, we stepped out for a while, then we went right back in. Once he was calm with me holding him in the water, I put him on his back.

First I held his head with one hand and his back with the other. Then I let go of his back, but kept his head up. Then, once I saw that he was holding his face above water on his own, I slowly... let go.. of his head! And he was floating! All on his own! He was wailing a little hit, but his mother said that was the sound he makes when he's determined and trying to do something, not the upset sound. 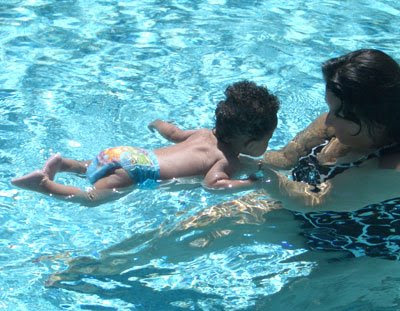 Soon he stopped making sounds at all, and just floated. Then he started to kick! It was lovely to see.

After a bit of that, I turned him on his belly, but didn't let go. Still, he kept his face out of the water, and kept kicking. He even paddled a little!

Videos on YouTube. E-mail me and I'll send you links. I'm seriously considering "infant swim instructor" for a second career. 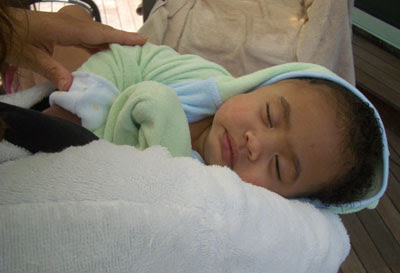 Afterwards, he was wiped out from working so hard, and all that excitement. We wrapped him up warm and snug, and he crashed hard in his mummy's arms. The next day, I took him on a pony ride at the horse show. We joked that I'd teach him to ride a bike next week, followed by bourbon and cigarettes.
Posted by Maggie at 6:17 PM
Labels: awesome, motherhood, superpowers