Our team, Schoolhouse Rockstars, won Trivia Night on Monday, to the tune of $260, that's $65 for each of us. All the erstwhile teammates who couldn't be bothered to show up, or thought Brooklyn was "too far away" are sorry now...
Posted by Maggie at 7:35 PM No comments:

Having told this story several times in the past few days, I realized that most of you have no idea what's going on with my family. So here's a rough chronological review...

End of September, Mum has a hysterectomy.
A few days before the surgery, Nonna (Mum's mum, in Chicago) falls down, breaks her arm, and is admitted into the hospital.
A few days after that, Nonno (Mum's dad, also in Chicago) totals his car. He's unharmed, and amazed by the wonder of airbags.
Back to Nonna in the hospital -- she tells the doctors that she fell because she can't walk, because she can't feel her feet. They can't find anything wrong with her, and label her a difficult and uncooperative patient, because of course an 87-year-old woman couldn't possibly actually HAVE something wrong with her that they haven't found yet, right?
Nonna keeps insisting there's something wrong (good for her), they do a CAT scan, and find two pinched discs in her back. However, surgery would be too risky, because she's on blood thinners for one thing, so they decide to try to treat it with physical therapy instead.
In October, Mum finds out that they found early-stage endometrial cancer in her removed uterus (this is not why she had the hysterectomy; this is a bonus surprise). As the organ's already out, and it was caught early, her risk is minimal. Still, Mum and the docs decide to remove her ovaries as well, just to be safe, as if it had spread, that's where it would have gone. Mum wants the surgery done immediately, but she's still recovering from the last one, so they schedule a laproscopic procedure for November 19th.
Back in Chicago, Nonna's not being released from the hospital, because they have to figure out what kind of care she'll have at home. While she's there, they find out she's got colorectal cancer. Again, they can't operate, but they're trying to treat it.

And Nonno is turning 90 on November 20th, and we were all supposed to head out to Chicago to celebrate, and stay through Thanksgiving. But now he doesn't want to celebrate while Nonna's in the hospital, and Mum's surgery is the day before, so that plan is off.

Instead, I'm heading out to Chicago from the 20th to the 22nd, just to hang out and keep him company for a few days. Mum would rather I were with him than with her, since I'll see her a few days later anyway.

These are my Cancerpalooza tour dates:

November 12-14 -- Up in Boston to visit with Mum pre-surgery. I will also be leaving the cat up there with her, because she has requested an extended visit with Siena to cheer her up. I'll miss her, but she likes visiting with her grandparents, and I'll get her back at Thanksgiving.

November 20-22 -- In Chicago to visit Nonna and hang out with Nonno, drive him around (since he no longer has a car), but under no circumstances celebrate anything.

November 24-28 -- Back in Boston for Thanksgiving, and to attend to post-operative Mum. And reclaim my baby monkey.

On top of all this, I have a monstrous head cold, Siena was vomiting and is now suffering through a week of special bland food, and I still don't have a date for Denise's wedding. Which is the day after Christmas, but Mum wants to spend Christmas in Chicago because "it might be Nonna's last," but I don't see how I can do that and be a bridesmaid in Boston at the same time.

Keeping my head up, though. And if anyone will be in Boston the day after Christmas, wants to play escort, and knows how to dance, let me know.
Posted by Maggie at 6:57 PM No comments:

Me: I've been eyeing this stool, just for some randomness
T: it's a must-have for every household.
Me: clearly. I am tempted
T: I thought you just bought a coffee table?
Me: I was just given a coffeee table, and I love it. But this is a stool, like to put your feet up on.
T: oh, well, in that case, as I said, it's a must-have.
Me: or upon which to perch Siena and take pictures of the wild jungle cat
T: exactly.
Me: Siena insists that "Rio" be played at all her photo sessions
T: well, that does go with her long curly locks.
Me: except for when she's feeling hungry, hungry like the wolf
T: she must be excited that Duran Duran just came out with a new album
Me: yes, yes she is
T: well, now i know what to get her for Christmas.
Me: she snuck out at midnight with my purse, and went down to Tower
T: she's so sneaky.
Me: also, she's really good at hailing a cab, and at forging my signature.
Posted by Maggie at 2:40 PM No comments:

You've probably already seen this by now, but it bears repeating. 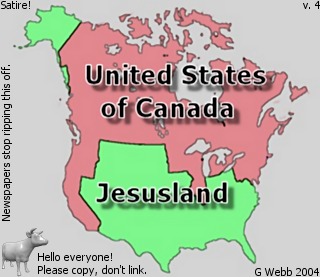 Posted by Maggie at 2:21 PM No comments:

When I got to my voting place this morning, the crowds were pretty bad, but not so much as I had feared. The media, however, was out in full force. Vans from NY1 and Fox News were parked out in front, and there were photographers from the NY Times inside.

Fortunately, my district, district 27, had only three or so people in line, so I was in and out in 15 minutes. I think that's because we have a lot of authors, artists, actors, and other types who don't follow a 9-to-5 schedule, and they were probably going to vote once the rush-hour crowds had subsided. One person I did not see while I was there was my across-the-street neighbor, Chuck Schumer, but Gawker did. I know we're a great neighborhood, but I didn't realize we were worthy of so much attention!
Posted by Maggie at 4:50 PM No comments:

Our own Jersey Journal is reporting that local psychic Dina Costello has foreseen a Kerry win. Thanks to Barista of Bloomfield Avenue and of course John Shabe.
Posted by Maggie at 3:49 PM No comments:

I just saw an ad for Finding Nemo on Ice this morning on the PATH train.

Finding Nemo on Ice? Doesn't that sound like a traumatic visit to the fishmonger's? Who came up with that brilliant idea?
Posted by Maggie at 5:49 PM No comments:

When the Sox broke the Curse of the Bambino last week, it got me thinking about this other curse: every American president elected in a year ending in zero (every 20 years) will die in office. Which would mean our current president, unless Reagan broke the curse by surviving his assasination attempt. I was kind of amazed that no one had ever mentioned this in regards to the current administration, but even more amazed when I talked about it with my friends over the weekend, and not a one had ever heard of the curse. So now you know.
Posted by Maggie at 1:23 PM No comments:

I'm not a huge follower of football, but I was rooting for the Packers yesterday.
Posted by Maggie at 11:20 AM No comments:
Newer Posts Older Posts Home
Subscribe to: Posts (Atom)
Overheard: I'm like the Chrysler Building; I'm so underrated! But I'm not like the Empire State Building. I don't want you in me, I just want you to look at me from afar.