For the record, I heart Dana Vachon

I don't care what you think.

Alas, while reading the Gawkers as they mock my darling, I gained a new insight:

'Pink Shirt Guy' is from Connecticut or Westchester. Secretly wants to sleep with his mother. Went to some prep school you've never heard of and is in banking because of his insecurities.

'Blue Shirt Guy' is from Long Island or New Jersey. Secretly wants to sleep with his sister. Went to public school and is in banking because of his insecurities.

Both are total douchebags."

I never realized before that the suburban New York class wars are oriented on a North-South versus East-West axis. Me being from New England, I am honorary North, pink-shirt team. Excellent!
Posted by Maggie at 4:20 PM No comments:
Labels: boys, funny, media

I hope Cloomydia isn't bad for a baby...
Posted by Maggie at 5:32 PM No comments:
Labels: funny, Husband, motherhood

You can't afford me

Powered By Limousines For Rent

(I don't know, though. Considering I just went through another insemination, somehow I think I should be worth more.)
Posted by Maggie at 3:14 PM No comments:
Labels: motherhood, sex

To summarize, a few things about me --

Despite all these facts, it might surprise you to know that I did not write this article.

But I could have, clearly. Not only that, I should have (why am I not writing more?).

I also should have read this article several years ago, when it still might have done me some good.

Recently, the Lumberjack, the Captain, and a former boss have all put the moves on me in some way or another. It really doesn't help an indecisive type such as myself to be all "strong bidder" like this, when really I should just settle (down) and get married, already.

Okay, so my husband is gorgeous, charming, funny... yeah, yeah, we all know that already.

What I'm finding funny lately, and what this clip reinforced for me today, is how much, as he gets gently older, he's beginning to look like my dad.

From How to Survive in New York on 99 Cents
Posted by Maggie at 2:44 PM No comments:
Labels: food 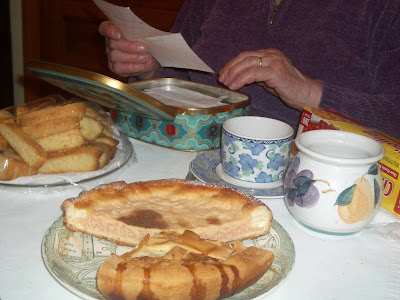 When I was little, I used to watch my grandmother cook. She didn’t write anything down, so neither did I. I thought I’d learned her recipes, kept them in the muscle memory of my hands.

I grew up, she passed away, I worked more and cooked less. One day I realized I couldn’t remember anymore.

I feared it was too late. But when I told her friends M and A my regret, I discovered they'd all shared recipes, and the friends had written them down. Now every week we pull out the card file, and I learn a new dish. Some were from my grandmother, some are M or A’s, and some were scrawled on the back of a paper plate during a party, source unknown. But each recipe, I assure you, is from someone’s Italian grandmother.

Sure, you can buy them in the market in those plastic boxes, but homemade is better. The only problem is that to make them at home, you need an iron to press out the cookies, and maybe you don’t want another very specialized appliance in your kitchen. 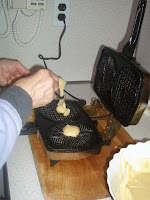 When I confessed to A that I’d always preferred her pizelle to my grandmother’s, she laughed because she uses my grandmother’s recipe. Here’s her secret: A doesn’t use a regular pizzelle iron, she uses an old Black Angus sandwich grill, which has an adjustable hinge height, so it doesn’t press as tight.

So if you like your pizzelle thin and light and crisp, and you have lots of storage space in your kitchen, get a pizzelle iron. But if you prefer a slightly denser cookie with a little more heft, you could experiment with a patterned sandwich press. Or you could search eBay for a Black Angus. 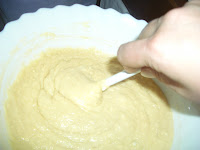 Sift flour, sugar and baking powder into a large bowl. In a small bowl, beat the eggs lightly, then stir into dry ingredients. Add melted butter and extracts, and stir by hand until batter is smooth and glossy. Let batter rest for half an hour. While batter rests, heat up the iron, get it good and hot.

Put a little butter on a paper towel and grease the iron plates up well, then wipe of any excess. You only have to do this before you start pressing cookies; after the first batch, the butter in the batter will keep the plates lubed up.

Drop a teaspoon of batter into the center of each circle on the press, close it, and squeeze the handles together for about five seconds. Then let go and let cook for about 45 seconds. (Cook times will vary depending on your iron. Experiment with your first few batches, until you figure out how long it takes to achieve golden brown deliciousness.)

Carefully peel the cookies off the iron plates, using a table knife to protect your fingertips. Lay cookies flat on clean dish towels to cool. Once they’re cool, stack them and store in an airtight container.

While the pizzelle are right off the iron and still warm, they’re soft and malleable. If you’re so inclined and can work fast, twirl them into a cone shape or press them into a bowl, to serve ice cream.
Posted by Maggie at 4:21 PM 1 comment:
Labels: family, food

A bit of stream of consciousness about something that's been making me feel creepy all day. Summarized from an IM with my darling bf:

Last St. Patrick's day, we were all at the bar, and the Lumberjack was there with his new undergrad girlfriend, who he'd met at a party in January. And I was sad, cried later, because it was the nail in the coffin that nothing was ever going to happen with us.

But it wasn't just that. There was something else that night that made me sad.
The Storm.

Storm had been friends with the Usual Suspects before I'd moved back home and met all these hooligans. Also, the Lumberjack used to cheat on his last girlfriend with her, but as far as I ever heard, they'd never actually dated for real. Since then, there had been some kind of falling out between Storm and the U.S., but she was still friends with 'Jack. But because of the circumstances, everything was hazy and unspoken by the time I started meeting these people.

I met Storm because 'Jack started bringing her to PubNight. Again, no one was talking, really, neither 'Jack nor the U.S., but as I understood it, 'Jack wasn't taking part in the falling out/shunning, so he brought his friend out, with no apologies nor explanations.

Now,
1. I liked her, she made a good first impression
2. I like 'Jack, and as such wanted to be friends with his friends, and know what's going on in his life. So I talked to her, we hit it off. And I want to make my own judgment about this new person I've met.

But she lives far away, and only seems to come to the area with him. So I'm beginning to notice that indeed, she is a little fucked up; the U.S aren't totally off-base. But still, I want to judge on my own.

Turns out Storm is still hung up on the Lumberjack. But she also has this boyfriend up where she lives. So she's been sublimating her romantic feelings into a friendship, like you do.

ANYway...
St. Pat's day, at the bar. Most of the Usual Suspects are there, as are 'Jack and his undergrad, and Storm and her guy, and me. The Undergrad is stuck to 'Jack like glue, and taking every opportunity to point out that he is HERS. While 'Jack pulls her aside to tell her to Chill, Storm asks me who the hell that is. I explain that she's 'Jack's new teeniebopper girlfriend, and Storm FLIPS OUT.

This is a woman with a boyfriend.

So part of the reason I was so sad after St. Paddy's was that I looked at Storm, who was the "other woman" for this guy with no honest and public relationship coming of it, and who now had a boyfriend and was still hung up on him. And I said to myself, "I do not want to be this woman. I tried, it didn't work, I need to move on. I deserve better."

And I mourned a little, but I did move on.

I also found out that night that Storm was moving back to the area -- in fact, right around the corner from me! So we'd exchanged phone numbers, and said we were going to hang out. She was supposed to move April 1.

The first week in April, she calls me, says "sorry I haven't checked in yet, turns out I'm moving April 15, everything's a mess."
I'm all, that's cool; let me know when you're settled in.
And then, she starts grilling me on 'Jack and the undergrad.
She's bullshit; starts in all -- APPARENTLY he's not her friend anymore, APPARENTLY he doesn't value her, if he's keeping these secrets from her. She says she HAS a boyfriend, she doesn't NEED 'Jack, et cetera.

I try to calm her, try to dissociate, get off the phone. She says she'll call me after she moves and settles in, and I don't here from her ever again.
That was almost exactly a year ago.

Since then, Storm always comes up when I run the Friend Finder on Facebook, but I never friend her, because she's not my friend. Today, when I ran it, though, something caught my eye.

Storm's new profile pic is a picture of her in a hospital bed, wearing a hospital gown...
with last year's boyfriend next to her....
and she's holding a newborn.

Yup, they had a baby a month ago.

So basically, she gave up on the Lumberjack, and got knocked up in short order.

Way to move on!

Honestly, this is great for her, she looks happy, and moving on was clearly the right thing to do. And she's engaged to the baby's father.

But I can't help it, the timing of it just makes me go ew ew ew.

I've been creeped out all day, so just wanted to share. (though I know this is not the breeding story I have been promising you, sorry...)
Posted by Maggie at 6:03 PM 2 comments:
Labels: boys, evil, Lumberjack
Newer Posts Older Posts Home
Subscribe to: Posts (Atom)
Overheard: I'm like the Chrysler Building; I'm so underrated! But I'm not like the Empire State Building. I don't want you in me, I just want you to look at me from afar.