Your expectations are growing too lofty right now -- you are aiming so high that you are bound to be disappointed when reality hits. You need to scale back your ambitions and believe that everything is happening the way it needs to happen, in the best time frame. Getting comfortable with having less control over where your life is going right now is easier than you think. All you need to do is open your heart and let someone else make the decisions for now.

Accepting a time frame? Having less control? Sure, that sounds like something I'm comfortable doing.

Though honestly, this is exactly what I needed to hear today, it's very appropriate.
Posted by Maggie at 5:46 PM No comments:
Labels: boys, destiny, horoscope

What I did on my summer vacation

This was my driveway earlier this summer. Old cracked asphalt with huge frost heaves down the middle. If your car rides low, you'd probably scrape the bottom against it. It was very hard to shovel, and impossible to plow. 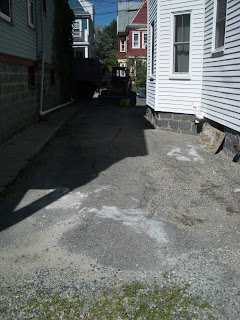 This was the parking area at the end of the driveway. When the developers who sold me the house were renovating, they tore up the asphalt here, because it was so bad. But instead of pouring fresh asphalt, they just filled the area with gravel. Messy gravel, impossible to shovel in the winter, painful to walk on barefoot in the summer, murder on my heels all the time. And the kids in the neighborhood were always playing with the stones, scooping them up, piling them on the deck or the stairs, making for slippery dangerous walking conditions (remember that scene in Home Alone with the marbles?). 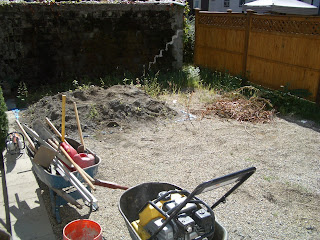 Since I live in a two-family condo, and the expense of any master improvements gets split between us, when the time came to fix the driveway, we decided to do a really nice, top-of-the-line job with pavers. They're easy to plow, smooth on bare feet, last forever and really up the resale value. They cost more than asphalt, but they'll never heave from frost, and we'll never have to redo the work. Check out the driveway now! 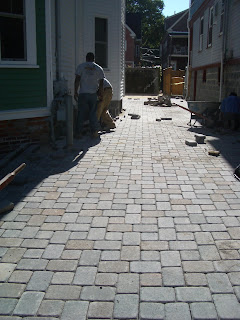 And the parking area in back! 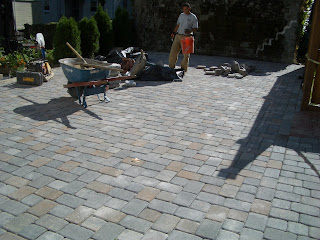 I really love it. You have to come over and see it! We had some bumps along the way, including a drainage issue that added about 20% to the final cost. But now all the gutter water is diverted to a system that waters our front garden, instead of running into the street and making puddles, or ice. And because I got so involved and informed about the project (they joked that I'm more familiar with the product catalog than they are!), and I was so nice to the workers (I brought the guys drinks and/or donuts in the mornings), they said I'm their favorite customer!

Yes, yes, I know that, at least in part, they were sucking up so that I give a good recommendation (as I'm the kind of person folks go to for recommendations). But whatever the reason, they threw in a bunch of work on the back steps and walkway... for FREE!

God I am so tired.....
Posted by Maggie at 4:26 PM No comments:
Labels: awesome, housework

Maggie Kennedy, if you were born to Sarah Palin, your name would be:

Who knows, Khaki Salmon Palin, you just might be president one day!
Posted by Maggie at 3:34 PM No comments:

Maggie's result for How geeky are you?...

Hey! You scored 43% Geeky, 74% Cranial and 19% Introverted! Brilliant! I honesty wanted to call this category "the perfect human being" but I thought too many reading recent results of other test takers may take offense.

I do believe this category is most likely the smallest percent of the population. (I mean, if everyone were like this wouldn't the world be a better place?) You, my friend, have balanced intelligence with an incredible personality, and have found a way to avoid geekiness.

You may find the combination of personality and brains can sometimes come off as conceited, and there are instances when you may bump heads with people. Being as people-smart as you are, you may find empathizing and listening to others, even if you know they are incorrect in something, can avert even the biggest problem.

Take How geeky are you? at HelloQuizzy
Posted by Maggie at 12:21 PM No comments:
Labels: awesome, funny, quiz 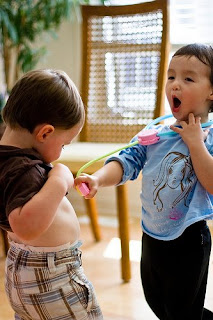 When a rock-climbing 27-year-old hottie hardbody (yes, yes, it’s the Captain) called my breasts “gorgeous” this weekend, in a playing-doctor scene that really should have given my almost 38-year-old self some serious body anxiety . . . well, I have to admit, it made the $10K I spent on that reduction a few years ago totally worth it. I promise, I will never again complain and get all insecure that they’re a teeny bit lopsided.

But what about B, you might ask? Well of course I’m thrilled when he admires me as well. But he’s not objective. And just because I felt validated by the Captain does not mean I don't also appreciate it when it comes from B; it’s just that I was prepared for the young hardbody to be a harsher judge, so it was a very pleasant surprise.

Oh, calm down. It's okay, B knows all about it. He let me play out some lingering distractions as I conquer my long-standing commitment-phobia. This unexpected hook-up with the Captain came after two years of flirtatious IMs and racy text messages that I never thought would ever transcend the typed word.

Sample exchange #1:
Captain: Why are you wearing panties? Why aren’t they around your ankles?
Maggie: Because I’m getting cash from the ATM

Sample exchange #2:
Captain: It’s hot and I’m in bed. Are you naked yet?
Maggie: Nope, playing Scattergories with my roommate.
(Later I fed the cat, too.)

Okay, maybe a few words of babble -- It took me a full year to read Infinite Book, only because it was too heavy to bring on the subway with me. But I loved every minute of it, and still refer to it often. I once met David Foster Wallace at a book reading in Union Square. I found him kind of superior and unfriendly, but hey, he was a genius! Also, I was at the end of a very long line of fans, and the woman in front of me had, very heavy-handedly, been hitting on him, so it was understandable if he was running low on patience and wanted to get back to being a genius.

He was an author I found myself thinking of in frequent random moments. As much as I love Faulkner and Marquez, and of course Joyce, Wallace was the one who colored, informed and spoke to my actual life, instead of taking me to other places.

my life as a scene from "Office Space"

So, at work right now, I'm consulting on someone else's project, as I am the resident expert on a tool that they want to include in a new section. This project has a Basecamp discussion board. And our office has a project manager who tries to keep all the active projects moving along in an orderly fashion.

This morning, someone had a question for me on the group discussion. I need to get an answer elsewhere, I have already sent out an e-mail asking for the info, and now I'm waiting for a response, which I expect later today.

The project manager just came up to my desk, leaned against the wall of my cube, and asked if I'd seen the message. ("Hi, Peter. What's happening? We need to talk about your TPS reports... Did you get that memo?")

I explained to him that I did see it... ("Yeah. I got the memo.")
... and that I'd already requested the info... ("And I understand the policy.")
... and that I'm expecting an answer soon... ("And the problem is just that I forgot the one time.")
... at which point I'll post the answer to the discussion board. ("And I've already taken care of it so it's not even really a problem anymore.")

The PM then told me that he needs me to look at the question that was posted on the message board... ("Ah! Yeah. It's just we're putting new coversheets on all the TPS reports before they go out now.")
and provide an answer. ("So if you could go ahead and try to remember to do that from now on, that'd be great. All right!")

I told him again that I'm already working on an answer.
He suggested that I post on the message board that I'm working on getting an answer.
...
At which point I asked him if he'd ever seen Office Space (and the guy who sits next to me burst out laughing).
Posted by Maggie at 1:53 PM 2 comments:
Labels: funny, media, suck

I once kept Children of Men out for over a year without watching it, and I'd already seen it.
Posted by Maggie at 6:57 PM 1 comment:

A fine time to not be pregnant

Grub Street came up to Boston in search of cheap lobster. Serves them right for going to the Crab.

I believe I just got my idea for what to serve at that dinner party in a month....
Posted by Maggie at 3:27 PM No comments:
Newer Posts Older Posts Home
Subscribe to: Posts (Atom)
Overheard: I'm like the Chrysler Building; I'm so underrated! But I'm not like the Empire State Building. I don't want you in me, I just want you to look at me from afar.