A jingly sweep of velvet

I have this amazing beaded velvet skirt that I bought online last year, and that I wear to death during the holidays. It is perfect -- strangers stop me on the street to ask about it and pay compliments. It's somehow both work-appropriate and party-riffic.

I just noticed that it's still available online, deeply discounted, and in a full range of sizes. For anyone who ever asked about it, go get it now! So cheap, so pretty, so flattering!

By the way, if you're surprised to find out that J. Peterman is more than a running Seinfeld gag, let me assure you that his clothes are top-notch. I still have the nightgown and the khaki skirt that I bought from his catalog back when I was in college.
Posted by Maggie at 4:15 PM 3 comments:
Labels: clothes, media

So, if you figured out the location of my poetic mitten drop, as Manda and I did, it may have occurred to you, as it did to me, that Penn Station, where trains from Boston arrive at 10 pm, is a mere two blocks from my mitten drop.

So I got off the train, and went straight to said mitten drop. I was on the phone with B, as he was very intrigued by the mitten game and wanted a play-by-play. We wondered along the way what the "four treats" were. I mean, the Empire State building sure is lovely, and large, but I would only count it as one treat. And there were way more than four street-side food carts along the way.

I get to Tractor Feed's "college of grad school learning" and there is a woman at the desk. Something is up, for this is not the "mitts with man [Nina] know[s]". B reads me the script from the haiku, so I tell the woman, precisely:

"Nina made gray mittens
They are for glorious me
hand them over, please"

...
She stared blankly at me for a few seconds and then said, "I have no idea what you're talking about."

She looked around the lost-and-found, found nothing, and then we left a bright green post-it note for tomorrow's shift that said:
"Hello!
Maggie was here to pick up the mittens which Nina left for her. I will return and try again Saturday.
Thank you!"

Then I went to Manda's house, and was going to write Nina an e-mail, but first I saw this post.

Then I saw her Twitter that she's sending me an e-mail with new directions. But honestly, I have so many defunct e-mails associated with this blog, who knows where she's sending it. I just discovered a two-month-old e-mail from Bostonist, kindly resetting my commenting password as I requested, but then I'd never checked that account again for a reply.... Goodness.

I take full responsibility for this situation, as I decided my travel plans so late in the game. Or we could blame the multiple storms for spooking me to the weather.

PS, this really is the coolest game. Even better now for the added adventure!
Posted by Maggie at 12:24 AM 4 comments:
Labels: Nina, nyc, yarn

Reader is my Friday Mitten Fairy

Nina has made mittens for me.

I am so incredibly behind on my own knitting (along with everything else in my life), I almost feel like I don't deserve them. But I have to say, it feels really nice to be on the receiving end of a homespun present! I still fondly wear the purple wrist warmers Shana made for me a few years ago.

I understand the general area where the mittens are, but I'm not too clear on the details, as I'm kind of rusty on Manhattan locales. Haneway, Manda, can you help? Maybe we can search together tomorrow?

Many many thanks from your "Grand Duchess of Boston Internet Excellence"!
Posted by Maggie at 3:35 PM No comments:

I promise we'll do another PN soon. Perhaps our next stop will be at Kingston or Lucca for a taste of the Green Fairy?

Thanks for the info, Bostonist!
Posted by Maggie at 2:11 PM No comments:

Aside from the massive produce (so oft repeated it seems like filler), Most of Ladies Home Journal's predictions for the 20th century did in fact come true. Some, such as two-day transatlantic travel or life expectancy of 50, were even conservative estimates.

There was a terrible ice storm in Boston Sunday night. Yesterday, the city was a sheet of ice. Advance salting did little to help the situation.

Yesterday morning I took out the trash in my pajamas and rubber-soled loafers. I was very careful. It was very very icy, despite the salt my neighbors had already thrown. I made it out to the curb no problem, but on my return, just as I reached my front steps, I fell.

I fell like a cartoon character. My feet went straight out from under me, my body went horizontal in mid-air, and I fell parallel to the ground, hitting my entire right side all at once -- shoulder, elbow, hip and knee. My hip, being the widest part of my body, and also being exposed by the by the boxer shorts bottoms on my pjs, bore the brunt of the impact: 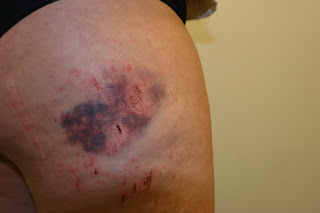 As bad as this looks, I was lucky. I didn't hit my head at all, nor did I put out my hand to try to stop my fall, which probably would have broken my wrist. That said, it still hurts a lot, so if you see me crying, now you know why. Be nice.
Posted by Maggie at 2:47 PM 2 comments:
Labels: Boston, pain, weather

Harry Potter Has A Huge Dong

Yes.
Posted by Maggie at 6:11 PM 5 comments:
Newer Posts Older Posts Home
Subscribe to: Posts (Atom)
Overheard: I'm like the Chrysler Building; I'm so underrated! But I'm not like the Empire State Building. I don't want you in me, I just want you to look at me from afar.