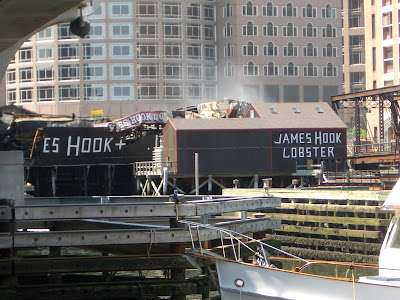 Forget about the Boston Tea Party -- there are tons of steamed lobsters right outside my office at this very moment. Where are the vats of drawn butter?

The most excellent Hook family owners vow to rebuild after blaze destroys landmark seafood business. And I believe they will, and quickly. Better, stronger than before even. Behold, the next-generation bionic lobster company!

What particularly saddens me at the moment is that something "devoured 60,000 pounds of lobster...", and it wasn't me.

I'm guessing arson. That lobster pound sat smack in the middle of some prime waterfront real estate, in the hottest development area in town. And the Hooks have fought to stay there before.

There's another possibility, though, one too terrible to believe. Could it be my fault? Could this be another one of my mystical powers?

You see, I recently gave up lobster. (Yes, I know that report says I can have it as often as three times a month, but considering the massive quantities I've eaten in my lifetime, I figure I'm probably already way over my personal quota. I mean, it's not like the mercury ever leaves your system.)

So, I give up lobster, and then my fave lobster place burns to the ground. This would be merely a coincidence, if it weren't for the Raven bar in New York. I used to celebrate my birthday at the Raven every year, and there were many other messy celebrations. But right after I accepted the job in Boston and prepared to move, the Raven burned down and was shuttered.

Honestly, what kind of superpower is this? Nothing I love can live on after I leave it? (wait, don't ask any of my ex-boyfriends about that one...)

Well if the Raven has hopes to rebuild, then maybe we can still hold out hope that the Hook family will persevere. In the meantime, any intrepid souls with scuba gear in the mood for some smoky lobster bisque?
Posted by Maggie at 5:40 PM No comments:
Labels: awesome, bars, Boston, evil, food, nyc, superpowers

For all who are breathlessly awaiting the final chapter in my sudden foodie sort-of-fame:
Ko-thario Picks Food Blogger Over Atheist Carnivore

I had a hysterically fun time with this whole adventure. And what a bonus -- I now have two tags of my very own on Grub Street!

For the record, despite B's encouragement, I wouldn't have responded to the ad at all if I hadn't found the Ko-thario's writing witty, charming and funny. I'm in no race to go to Ko; I'll dine there eventually. If anything, it was the pork fat that was extraneous in this equation, not him.

Ko-thario, Dominique -- I hope you have a lovely time.

I am about to sign up for a local CSA, so I'll be getting a steady supply of fresh, locally grown fruits and veg all summer and fall.

The minimum share has food for two people. I'm going to ask my new roommate if he's into sharing it, but if not, I might be looking for someone to share. Let me know if you'd be interested!
Posted by Maggie at 11:48 AM No comments:

Body news and translations as poetry

As much as I wish I found more foods to be unappetizing, what really sets my heart a-flutter is that translation.
Posted by Maggie at 10:36 AM No comments:

Ko-thario and me -- more banter

He replied! Funny, charming, lots in common, cute. Looks like a tall dark Jewish Michael Cera.
Even though he's made this whole quest public, I'm not going to post his e-mail here without his consent. But I did write back again:

...67 replies -- behold the power of Grub Street! I'm glad you didn't stop counting at 69, too cliché and puerile. That said... the last time I went to a Trivia Night, our team name was "We're Not Gynecologists, But We'll Take a Look." So of course our final, losing, score was 69. The trivia master was at a loss for words.

I'm an omnivore / recipe anthologist / windowbox gardener / online journalist. I have a Master's in Journalism, but beat reporting isn't really my style. It also pays about as well as abstract expressionism, I suspect. So now I run the online events calendar for a major newspaper, as well as all the new-fangled mobile action. If you absolutely need to check the baseball score while we're out to dinner and you have a cell phone handy, I'm your girl.

I also used to edit a magazine for NYU, and my dad was a physics professor, so I still have a soft spot in my heart for academia.

PS: I like your smile.I hope it's not really *that* rare.

And then I saw the latest update on Grub Street. I was one of only five people he wrote back to! (though I was also one of nine people who mentioned Brazilian waxes, alas.)

Grub Street posted the update at 4:15, and I didn't send off my reply until 5 -- I had it open on my desktop since this morning, but it's been a hectic day at work. If I'd finished up a little sooner, I might have more interesting gossip for you.

With uni you get two

Grub Street tells of a funny foodie mensch who's looking for a Ko-date on Craigslist. B insisted that I reply (if this works out, he will have only himself to blame...):

Baggage -- does my Samsonite wheelie bag count? Because, seriously, it's amazing. Ten years old, travels with me about every other weekend on average, it's been as far as Japan and the Caribbean, doubles as a cat bed whenever I forget to put it away, and it's still going strong. Also, it may have saved my life, as I was dropping it off for repairs instead of commuting down to the WTC on the morning of September 11.

I speak five languages. Unfortunately, Dutch is not one of them. That said, if you're "romantically forking foie gras into [my] mug," I'll let you cop a feel. Left or right breast, your choice -- each is magnificent. Feed me uni too, and you can touch both.

You want a link? Here.
You want a picture? There's one in this post.

Hmm, I might have to make an OK Cupid profile out of that.
Posted by Maggie at 7:51 PM 5 comments:
Labels: awesome, boys, butts, food, funny, nyc, NYMag, Siena, travel

Not as green as they claim to be - The Boston Globe

Not to say "I told you so," but I'm glad to see my local paper discussing issues of the new Green craze that have been concerning me for a while.

When "green" became a positive catch phrase, products started tossing it around for the marketing benefits. But the term is meaningless; there are no guidelines or restrictions. This article includes many examples of "green" products that are no better, or even worse, than other products that don't wave that flag.

Of course I'm all for environmental protection and awareness. I drive a Civic with amazing mileage; I recycle religiously (and more importantly, I reuse as much as possible first, as the recycling process uses up energy); I even bought a "green" house that's highly energy-efficient and contains no off-gassing synthetics.

But I don't want the term to be cheapened, or an unaware public to be fooled. Take the Poland Spring bottle. Sure it uses 30% less plastic, which is great. But bottled water is a huge waste of transport energy on top of all the plastic. People should be drinking tap water and carrying it around in reusable containers.

When cars were introduced, they were a solution to the existing problems of that time. But flash forward a few years, and they've created a whole new set of problems. Our environmental crisis is a complex issue. Simplistic solutions are only going to create new problems for us in the future. And simplistic promotion of anything that calls itself green feeds right into that.
Posted by Maggie at 10:20 AM No comments:

BY the way -- apologies for being such a slacker lately. I know that for some people, no excuse is good enough, while for others, no excuse is necessary. Therefore, let me only say that the ironic truth of amateur blogging is that exactly when life gives you lots to write about, is exactly the same moment when life gives you no time to write about it.

Make this for me and win my heart

Umami love:
Picholine’s ‘Oceanic’ Sea-Urchin Panna Cotta
Posted by Maggie at 6:44 PM No comments:
Newer Posts Older Posts Home
Subscribe to: Posts (Atom)
Overheard: I'm like the Chrysler Building; I'm so underrated! But I'm not like the Empire State Building. I don't want you in me, I just want you to look at me from afar.