My last days of disco 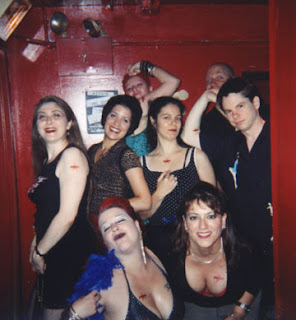 Y recently asked me if I'd ever gone to Twilo during my crazy New York club days, before I became an old boring suburban lady. It got me thinking back on those days a bit, which perhaps I never talked about much here.

There was one night that the Cokehead Alcoholic took me to either Twilo or Tunnel, which were near each other on West 27th Street in Chelsea, so I honestly can't remember which one it was. It was fun, but it was also kind of strange for me, because I was more used to the fetish/goth scene of the meatpacking district, which was a much different kind of club scene. The clubs I most often went to, Mother and True were smaller, with a tight community of regular attendees. They definitely did not have a metal detector or pat-down at the door, like Twilo/Tunnel did.

Anyway, the night we went to the T club in Chelsea (whichever one it was) we were dressed in Edwardian fetish/goth attire, having stopped at Hellfire first (an underground sex club in the meatpacking district that was closed down when they built the hotels and gentrified the place). All our velvet and corsetry didn't exactly fit in with the ecstasy-fueled club-kid vibe of the place, so we did get searched upon entry, which was strange. Lots of raver kids, lots of drugs, we didn't stay very long. But I did think that, had I gone with someone else, and were I dressed appropriately and in a different mindset, it would have probably been fun. Sadly, I never made it back to check it out again before it closed.

I'd clubbed in Boston, LA, DC, Spain and Italy before I moved to New York, so I had a pretty good sample for comparison, and I think I caught the New York scene at a perfect moment. Before I got there things were nuts, with Michael Alig killing his drug dealer and club kids appearing on Oprah. By the time I got there, things had mellowed a bit so that it was a nice creative community without too much evil craziness.

To be fair, I didn't just sit on a balcony and watch, I threw myself into it pretty deep, so maybe I had a better experience because of that. I was friends with organizers, I danced in a cage (god I wish I'd saved that picture; they used it for promotion), I worked the door and decided who could and could not come in. I was going out four nights a week, doormen recognized me and I rarely paid to get in. I was fully invested, until I retired from the scene. (And it took a few tries, like Michael Jordan, before I really did retire.)

A few years later, clubs started to fall prey to the triple-whammy of Giuliani's quality-of-life/cabaret law crackdown; the inflated rents of the real estate boom; and the sobering climate of post-9/11 New York. Most of the clubs and parties I went to closed down around 2000-2001, and were replaced by gentrification and high-priced bottle service.

Which is now itself dying, so maybe we're on the edge of another golden age of clubbing. These things do tend to come in cycles. Of course, I'm also pretty old now, so maybe my opinion is for shit.
Posted by Maggie at 3:20 PM 2 comments:
Labels: bars, boys, cokehead alcoholic, nyc, sex

The Oracle of Starbucks

Dammit, I don't even drink Starbucks! So instead, I plugged my regular Dunkin' order into the The Oracle of Starbucks, and yet it had me pegged:

You pride yourself on being assertive and direct; everyone else thinks you're bossy and arrogant. You're constantly running your mouth about topics that only you would find interesting. Your capacity for wasting other people's time is limitless. Your friends find you intolerable, that's why they're plotting to kill you.

Can also be found at: Trendy martini bars

Like I said, it was spot-on (except for the part about ice cubes and crystal for my water, but whatever...)

So then, I figured "no sugar" was maybe a bit too fussy, since that could be assumed, so I took that out and bowed once again to the oracle:

You're always worrying about your weight. That's because you're fat. You're constantly whining about problems that are your own fault. You are a total pain in the ass.

See, again, I have to admit that's kinda true (aside from the Jerry Springer appearances).
Posted by Maggie at 11:30 AM 1 comment:
Labels: food, psychic

Ordinarily, if you don't have plans to come to PubNight, then I would tell you that you are an idiot of the first order, because PubNight is excellent.

Tonight, I'm really wishing PubNight had not chosen this week to boldly cross the river into Brookline, and instead we'd stuck to our cozy Cambridge home base. Because tonight, Inman Square is Where the Wild Things Are, and by wild things I mean Muppets, Bowie, free Popcorn, a very young Jennifer Connelly, and ROVING PUPPET COMEDY.

Sorry, I need to stop yelling and calm down.

Wait, wait, hold the phone (oh, yeah, if you've been trying to reach me, the cell is dead, the cell charger is in Vancouver, and the new land line isn't playing nice quite yet. Try not to miss me too much, or call my roommate or my office if it's dire).

ANYway, that Roving Puppet Comedy? They will be performing...
(deep calming breath)
Law and PUPPET!

Kalimera, I know you don't want to miss that one, get yourself over there! (you weren't going to cross the raging scary river for PN anyway, right?)
Posted by Maggie at 4:55 PM 2 comments:

Me and Sofia, we Italian women are so hot.
Posted by Maggie at 6:19 PM No comments:

Fine fine, you were right

In other news -- Lollapalooza this weekend! Party on! Unfettered! Free! Crazy!
Posted by Maggie at 5:18 PM No comments:
Labels: boys, music, sex, travel
Newer Posts Older Posts Home
Subscribe to: Posts (Atom)
Overheard: I'm like the Chrysler Building; I'm so underrated! But I'm not like the Empire State Building. I don't want you in me, I just want you to look at me from afar.