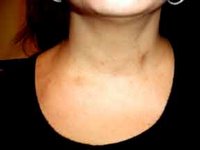 When I stumbled out of the phone booth, clad only in a black silk garter belt and stockings and pulling a borrowed camel-hair overcoat shut around me, I ran right into Manda, who was kind enough to point out that I was covered in hickeys.

Unfortunately, I was kind of distracted at the time, so I didn't remember this crucial information until I had already pulled into my godparents' driveway and waved to them. Dammit! No time to apply coverup or change my scoopneck for a turtleneck, even if I'd had one in my bag. 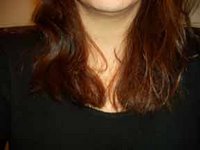 Which is why I went into their house with my hair like <--- this, as obvious as that might have been.

But good thing I made the effort, because when I entered, I found not only my godparents, but four other close friends of my parents as well. And I have no pictures that even barely do justice to the spectacle.

Let's just say that had anyone noticed anything, it would have been convincing to claim a rash, a very extensive rash.

And yes, I know that I swore I was going to give up younger men. And also casual hookups. I'm still working on that, but apparently I need to wean myself, not go cold turkey. I'm just weak, and 20-year-olds can be so persuasive...
Posted by Maggie at 5:17 PM